At the start of 2020 we headed off for Europe, to undertake a series of assignments: Winter in the Lofoten Islands of Norway, Spring in Devon and Yorkshire in the UK, and early summer in The Cinque Terre and Val D'Orcia of Italy. After over 35 hours of travel we finally arrived in Tromsø, within the arctic circle, expecting to spend a couple of weeks photographing the Sami people, their herds of reindeer and the stunning coastline and Aurora Borealis of Northern Norway. Access organised, cars and accommodation all booked, and location research all done, we were tired but excited at the prospect of photographing locations we had planned for two years.

At the time we left Australia there were early reports of a zoonotic virus spreading from China to other parts of the world like Italy; resolved that we might not make it all the way through our ten-week trip we rationalised that it was still worth going. We checked with our travel insurance company that we were covered should the worst happen – assurances that turned out to be worthless when the insurance industry refused to cover 'pandemics.'

We arrived in the middle of an Arctic blizzard – Tromsø was deep in snow drifts and pack ice! Undaunted we shopped for food for the coming week; no issues keeping it fresh – the car would be a portable freezer! That night we headed out for our first attempt at the 'Northern Lights.' En-route we did notice that most of the shops were closing up early – even the 24-hour Hungry Jacks was closed up – spooky! Talking to the other keen photographers at our selected location (you are never alone in good 'photo-spots') we discovered that while we had been flying "Covid-19" had been identified and nations were immediately drawing up plans to isolate. All of Norway was going into 'lock-down' and the airport was closing in 24 hours! 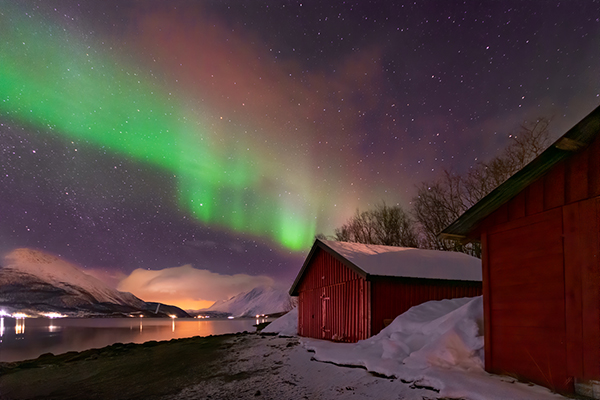 © Gigi & Robin Williams
Trying to stay focussed (no pun intended) we did manage to get some photographs of the Aurora Borealis before rushing back to our apartment to plan our exit strategy.

Two flights and a lot of hassle/money got us back to the UK where we had to self-isolate whilst trying to get flights back to Australia. Four days spent on the phone eventually secured us economy seats, at business class prices! We were lucky being repatriated back to Australia via the UK; in the ensuing weeks all inbound flights were cancelled, and 30,000 Australians were identified as being stranded overseas. It was not a good outcome though – eight international flights and 46,000 km for one night's photography – not good for us, or the planet! © Gigi & Robin Williams
Back in Melbourne, over five million people were under continuous Covid-19 restrictions from March 2020 to November 2021 – including six total lock-downs (basically house arrest with curfews on the streets) totalling 262 days – the longest and strictest social restrictions anywhere in the world.

Like many photographers, we tried to concentrate on projects that could be undertaken in the studio at home, rather than our preferred mode out in the landscape. We completed the next project in our series that explores the relationship between liquids and light. Previous work had concentrated on high-speed photography of water droplets. 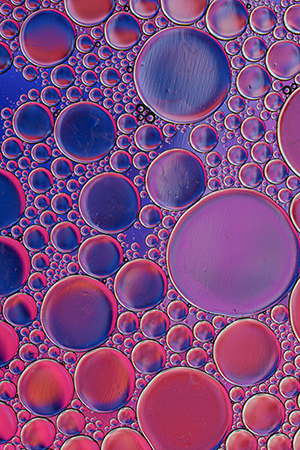 © Gigi & Robin Williams
Like all artistic endeavours this project gradually evolved. We had seen many examples of abstract shapes of oil on water and we wanted to try this technique as an extension of our work exploring the relationship between liquids and light. Our first attempts looked like everyone else's – too many circles of oil with strange colour and no obvious meaning or purpose.

Many creative photographers struggle with techniques like this because they lack the fundamental training that we have as biomedical photographers. For us it was clear how we would control the various imaging parameters. The images were all 1:2 close-up using the good old manual 105mm Micro-Nikkor (standard equipment in medical photography). The liquids were contained in a glass Petri dish and transilluminated from below – think standard specimen photography with Rheinberg lighting. High-speed flash allowed us to stop the motion of the liquids (which was comparatively fast given the 1:2 scale). 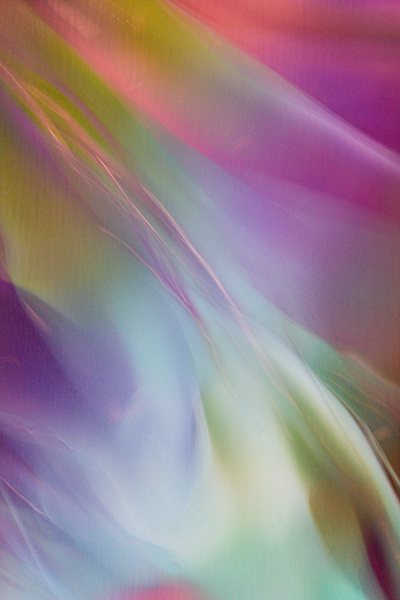 © Gigi & Robin Williams
We then set about a series of controlled experiments to determine how to get the effects we wanted – changing the viscosity of the oil, using surfactants, changing lighting, and most important of all, the tools and methods for moving the oil 'bubbles.' We were soon able to produce very acceptable results.

But the images still lacked 'purpose' – a unifying story – the characteristic of truly creative work. Both of us struggle with the schism between scientific imaging and creative photography: we were trained to produce objective records with no hint of personal 'vision' or 'creativity' and yet these are the defining characteristics of artistic work. This is not just something that we are experiencing after 'retirement' as imaging scientists and the move to creative photography – as far back as 1988, at the Rochester Annual Meeting of the BPA, Robin won the prize for the best oral paper with a topic called 'Standardisation or Imagination.' Over the ensuing weeks we gradually evolved a story that had relevance to both the subject matter and the context, and we created images deliberately to fit that story – 'Photo-Synthetic.'

'Photo-Synthetic' is a collaborative body of work in four parts that explores notions of creation, and therefore creativity. Set in the broader context of our longstanding fascination and photo-exploration of the interaction between light and liquids we have used the interactions between oil, water and light to represent the phases of the evolution of life on this fragile planet. Life in a liquid state. This series of photographs is the result of combining our backgrounds in science with our artistic sensibilities and aims to have the viewer engage in a world of interpretation and metaphor. Aristotle's cosmic model was centred on fire, air, water and earth and you will find these embedded in the four series that make up 'Photo-Synthetic': 'Primordial', 'Metamorphosis', 'Enlightenment' and 'Illumination'. Our use of natural elements – liquids, heat, light, gases – resonates with the processes that led to the development of the first living things from base elements. 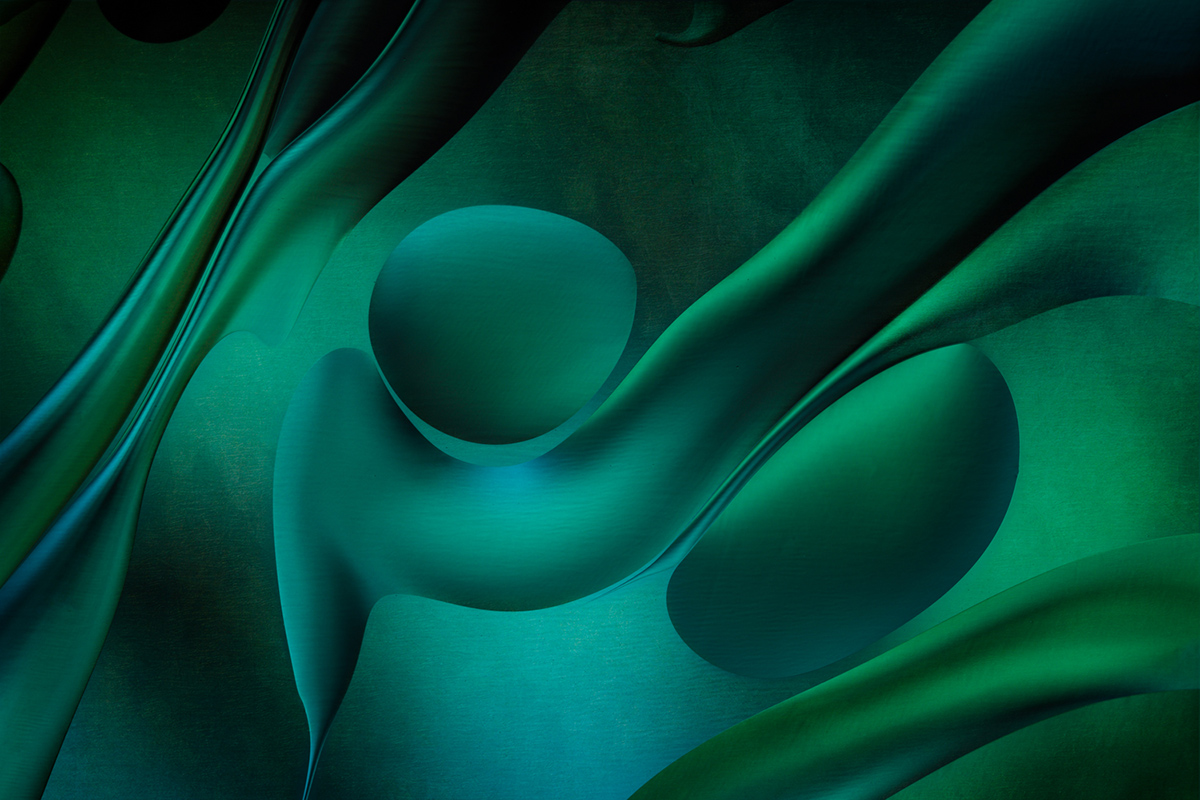 Metamorphosis © Gigi & Robin Williams
The exploration therefore begins with 'Primordial', at the very beginning of time, where we find swirling worlds of green, brown and black with the occasional flash of blue sky. Strange, weird, animals can be sensed – like putting a hand deep into a cold and slimy pond.

In 'Metamorphosis' we find conspicuous changes in shape and form with heat and gases playing their part – surreal Dali-esque figures are emerging. There are shapes reminiscent of ova and spermatozoa – the beginning of life. Gas bubbles in the murky void coalesce.

With 'Enlightenment' comes evidence of the senses as the source of knowledge – full of light and colour, uplifting and bright – like stained glass windows. Almost overwhelming, it can be easy to be seduced by the colour and detail of life. 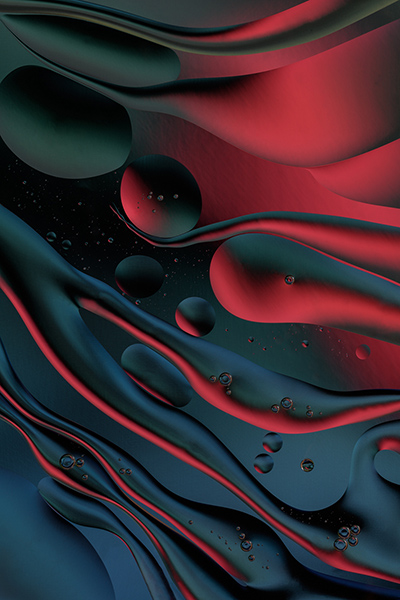 Enlightenment © Gigi & Robin Williams
In 'Illumination' we experience the unveiling of things not previously known – we see clearly when there is less to see. The colours of white and saffron reflecting the mystical and transcendental. Simplicity is the key to understanding. 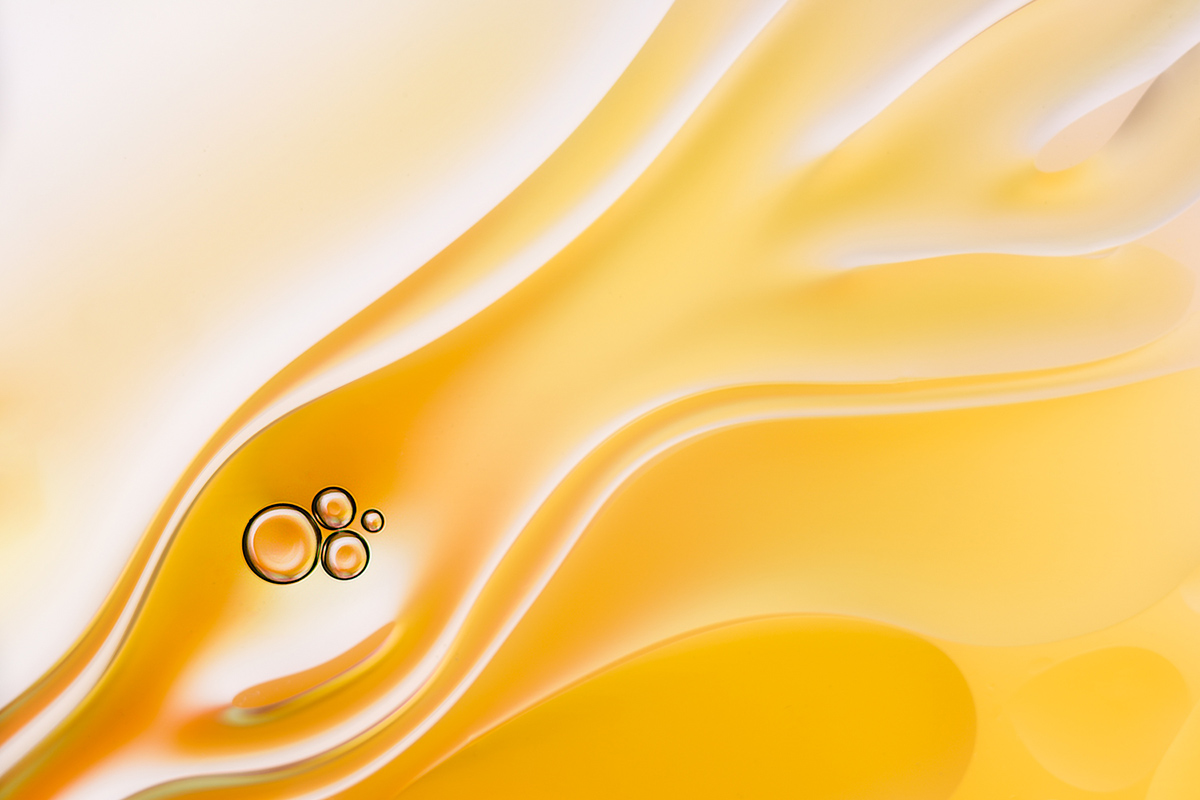 Illumination I © Gigi Williams
If you would like to see the full series of images that constitute 'Photo-Synthetic' please check out our website at: https://www.robinwilliamsphotography.com/photo-synthetic

We were very pleased to have found a meaningful 'project' to fill the endless hours, weeks and months of social isolation due to the Pandemic – but perhaps you just think we went mad!